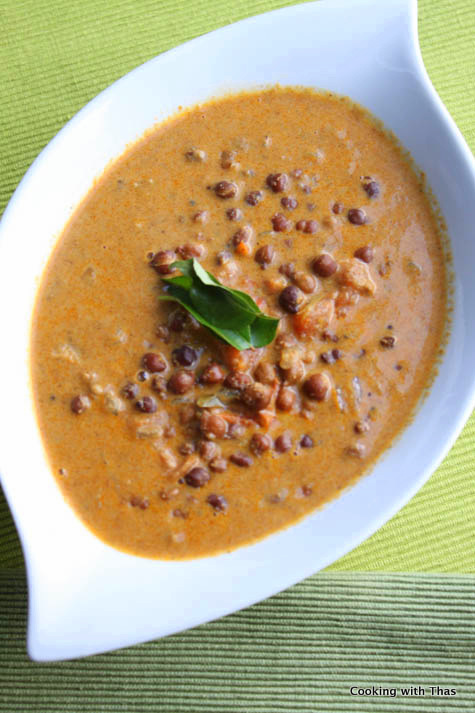 Anything when cooked in roasted coconut gravy tastes spectacular…

Having brought up in Kerala must have been the reason for my deep likeness for roasted coconut curries. In Kerala, we use a lot of coconut on daily basis and most of the dishes call either for grated coconut or coconut paste or coconut milk. And we all adore this particular ingredient a lot. Should I say anything about coconut oil??? The aroma and the flavor that a couple of tablespoons of coconut oil impart to a dish is just amazing. I can just go on and on talking about coconut.

When I hosted the Eid contest, one of the recipes I got was the Soy chunks cooked in roasted coconut gravy by Greenhorn Cook. I made that recipe and fell in love with it especially the roasted coconut gravy. Making the gravy was very similar to the gravy that’s made by me for making the fish curry. Literally, anything can be added to that gravy, so this time I added black chick peas. It tasted delicious, I couldn’t resist having the gravy just like that and to lick my fingers…Yummy! 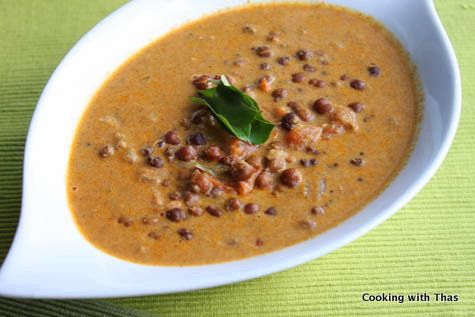 Print
Prep time
10 mins
Cook time
25 mins
Total time
35 mins
Recipe type: Main
Cuisine: Indian
Serves: 5 People
Ingredients
To roast and grind
Instructions
Notes
This roasted coconut along with the spices can be kept in the refrigerator for a a few weeks. So make a lot and just before cooking grind it into a smooth paste.
3.2.2124