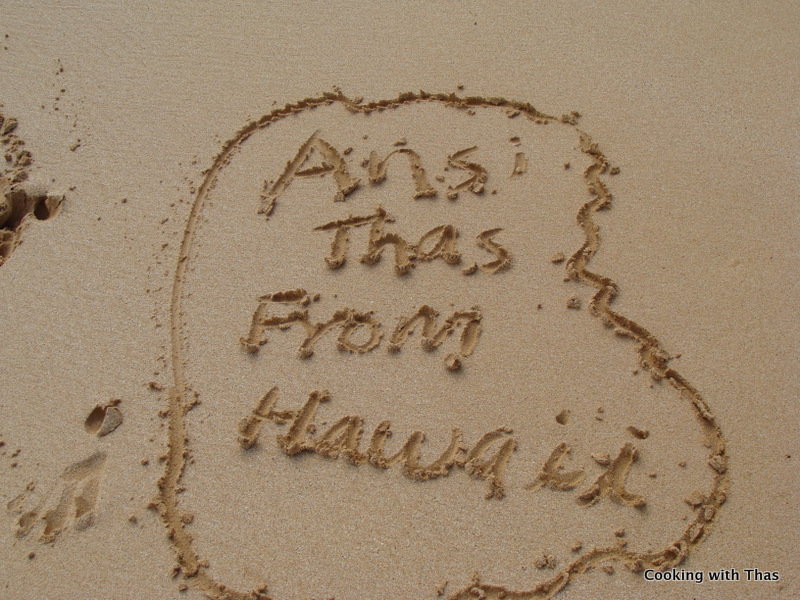 I had been wanting to write about my travels for so long but I kept postponing it. Today, while backing up all my pictures, I looked at our Hawaii vacation pictures and cherished those beautiful memories. That sort of triggered me to write this post.

We visited Hawaii in 2007 and the pictures were taken on a point and click camera. These pictures don’t look that great, so please excuse me for my poor photography skills and just enjoy reading.

It is said that first time visitors to Hawaii would walk around with their jaw hanging down in disbelief at what they saw. We were curious enough to find out if it was true, so we packed our bags on Nov 14th 2007 and boarded the flight to Hawaii. It was very exciting as we were getting away from the freezing cold weather in Chicago. We had often made impromptu trips, but this one was not like that. We had to do some research about the different islands in Hawaii and the places to visit there. Of the 4 islands, we planned to visit 2 of them: Oahu and Kauai. We even ended up buying this book: The ultimate Kauai guidebook, Kauai revealed. This was the  best companion and helped us to explore Kauai to the fullest.

After about 9 hours of flying we were just minutes away from Hawaii. As we were nearing the island, everyone in the flight including us were looking out the window and enjoyed the stunning view of mountains and oceans. We landed Honolulu, the capital of Hawaii. Air hostess and the people in the airport greeted us by saying “Aloha”, the Hawaiian “Hello”. After security check and baggage claim, we got out of the airport. Coming from Chicago, the first thing I did was ditching my sweater, a huge relief I had felt. That was a huge temperature difference, but we embraced the sunlight and the warmth in no time. There began our 2 weeks vacation in Hawaii.

Honolulu is the biggest city in HI and is the home to many prettiest beaches. We rented a car and drove to our resort which was a little far away from the airport. We were drop dead tired and at the same time very excited too. I wasn’t expecting a huge traffic in honolulu, obviously, it was not worse than Chicago traffic. We wanted to get a good sleep so that we could wake up refreshed in the morning and start exploring Oahu.

After a much needed and heavy breakfast at the resort, we kicked off our vacation. We first drove to Waikiki beach. In Hawaii, any time is a perfect time to visit the beach, that encouraged us to hit the beach in the morning itself. Waikiki beach is a popular beach in Oahu, the most crowded beach and the ocean is found stretched embracing the city line. We spent that day and night at the beach. Night life at the Waikiki beach is energetic and vibrant with all kinds of street side entertainment, Hawaiian dance/songs. The lights, the crowd, the street food, the stalls and the merry mood truly gave a festive experience. We had spent the whole night roaming around, did some Hawaiian shopping, tasted some of the food specialities etc etc. In just one day we got into the Hawaiian groove. It was hard for us to go back to the resort, we had to as we had a lot of plans for the next day.

Next day,  we headed to Diamond Head: the most famous volcanic crater in the world. The Diamond head trail is a 2 miles hike to the rim and it took around one and a half hours to reach the top. There were two sets of stairs to climb: one with 99 steps and the other with 76 steps. There was also a 225-foot unlit tunnel. We climbed all the stairs and reached at the top of the diamond head. It was totally worth the effort, we were so amazed by the breathtaking view of the entire west side of the island, which stretched from Waikiki to Koki Head. We spent some time there clicking and posing for pictures, enjoying the stunning view of the whole island. 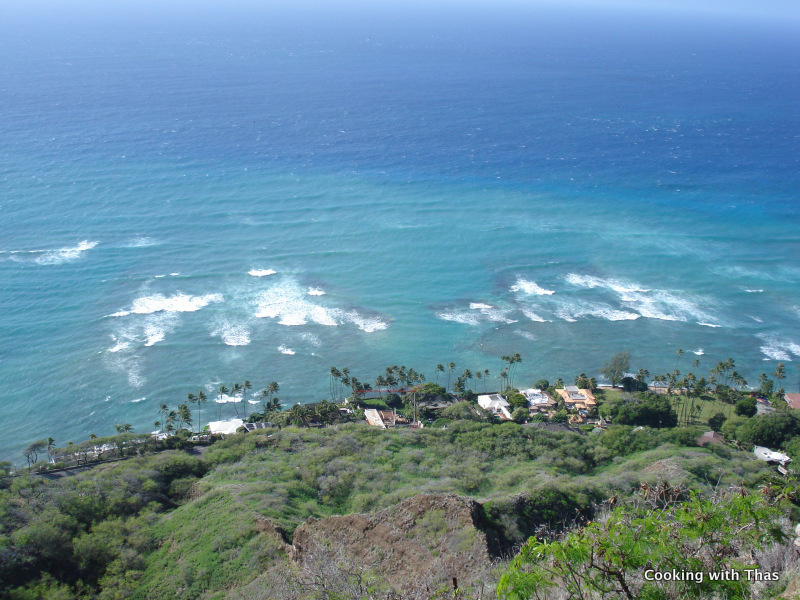 We climbed down the stair and resumed our drive. On our way we saw many lookouts and Yes we stopped at most of them. The lookouts gave a spectacular view of the beaches and the mountains there. We kept driving aimlessly, and we saw a bay: Hanuama bay. We stopped at the bay and walked into the bay. It was drop dead marvelous. This place is shown in the movie “50 FIRST DATES“. This is one of the places I loved so much in Oahu. 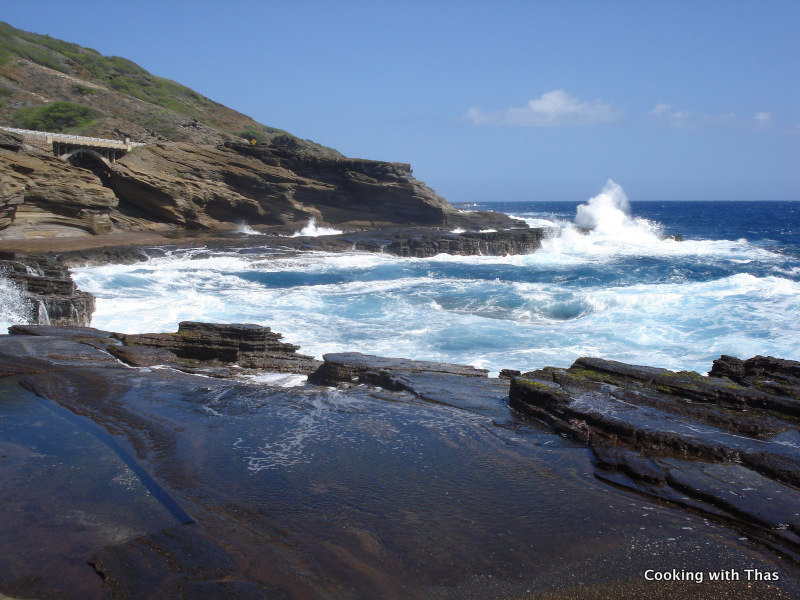 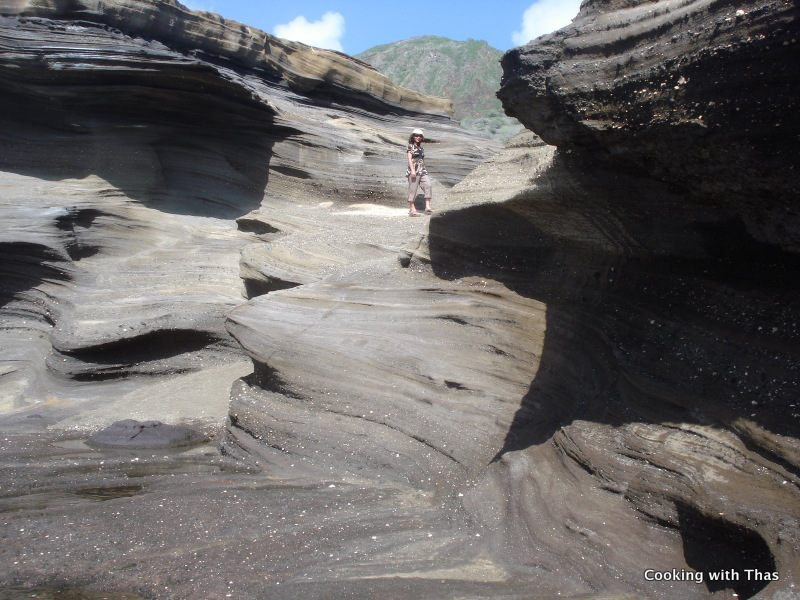 We had spent 4 days in Oahu, after that we headed to Kauai. I would say Oahu has more of a city life and not so much of the island life experience. We really wanted to experience the lazy island life, for that Kauai island was the best. It was more like a private island with less people and more nature. 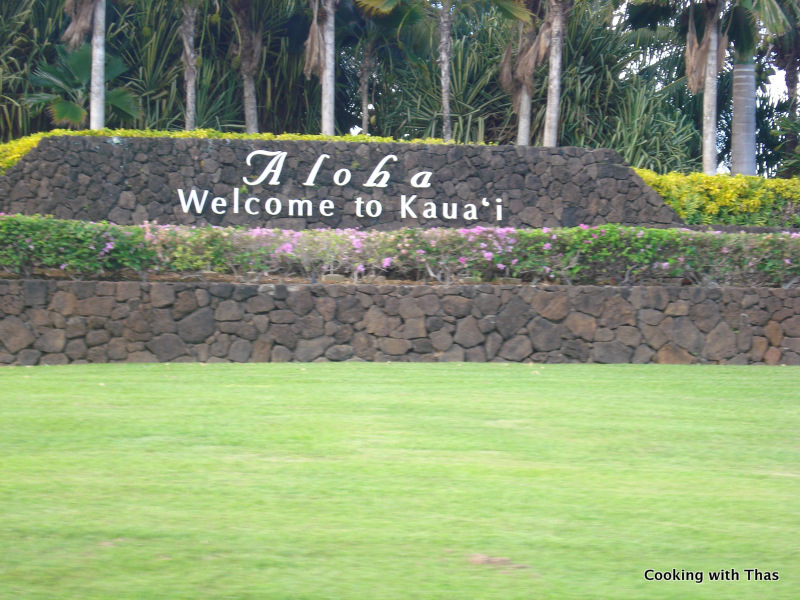 Flying from Oahu to Kauai only took 30 minutes, in no time we landed the most incredible island, Kauai, The Garden Island.

Even though Oahu and Kauai are the Hawaiian islands, I found both the islands had totally different personalities. Kauai has a lot more of serenity and natural things to offer. Unlike Oahu, Kauai is so laid back, calm and peaceful. Kauai is in deed a place to be way from the hustle and bustle of the city life. Local people in Kauai were found so relaxed, most of the people were tourists and the locals led a very simple life serving the tourists.

The most interesting thing I noticed there was that there is only one road which connects the whole island. Absolutely no highways, expressways, toll roads, also no way of getting lost; you will find your way back pretty easily. 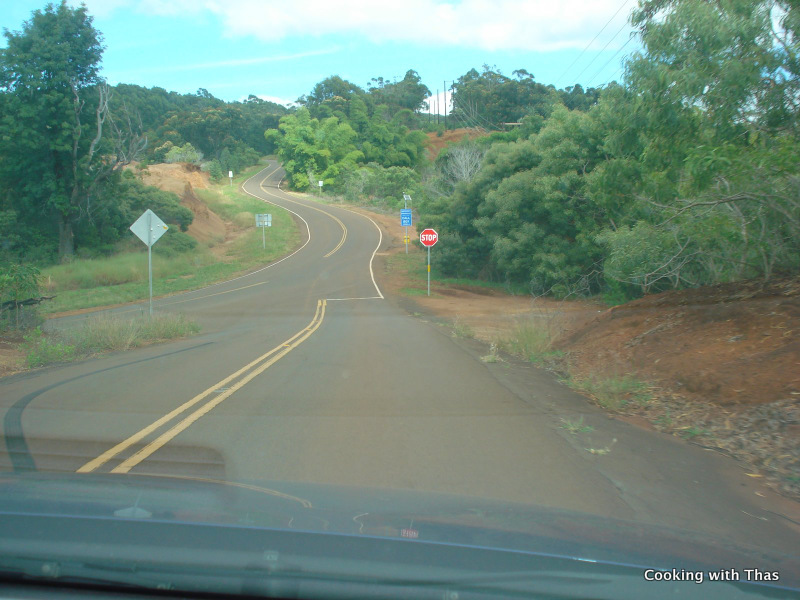 We stayed at one of the best resorts in kauai, “Resort Quest”. Spectacular ocean view from the suite and the lushness added thrill to our stay. My dream of waking up to the view of the ocean and dozing off to the melodious sound of the waves came to reality. Surprisingly, I was woken up not by the snore of my husband (:P) but by the natural kookookoo-koo of the roosters. Wandering roosters are a common scene in Kauai. 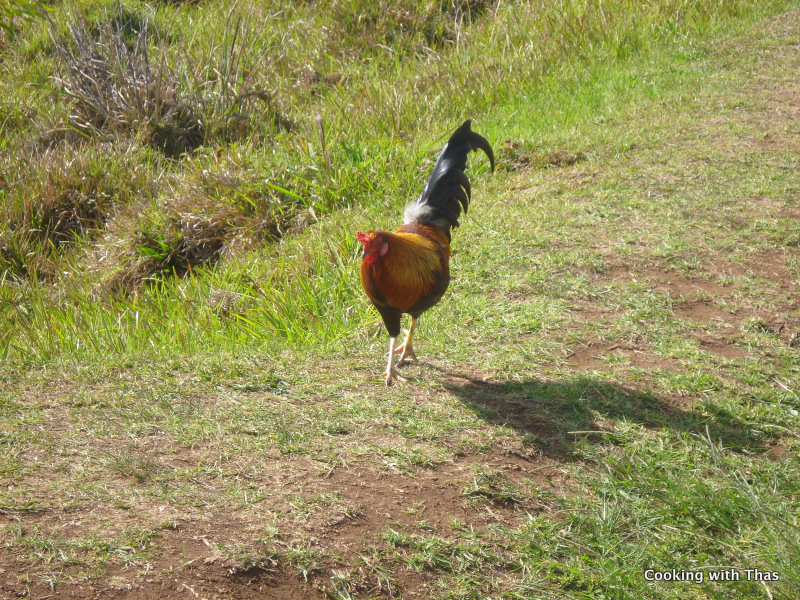 First, we drove to Kauai north shore. Hanalei lookout gives the most serene view, everything looks so lush from there, they had acres of taro fields. 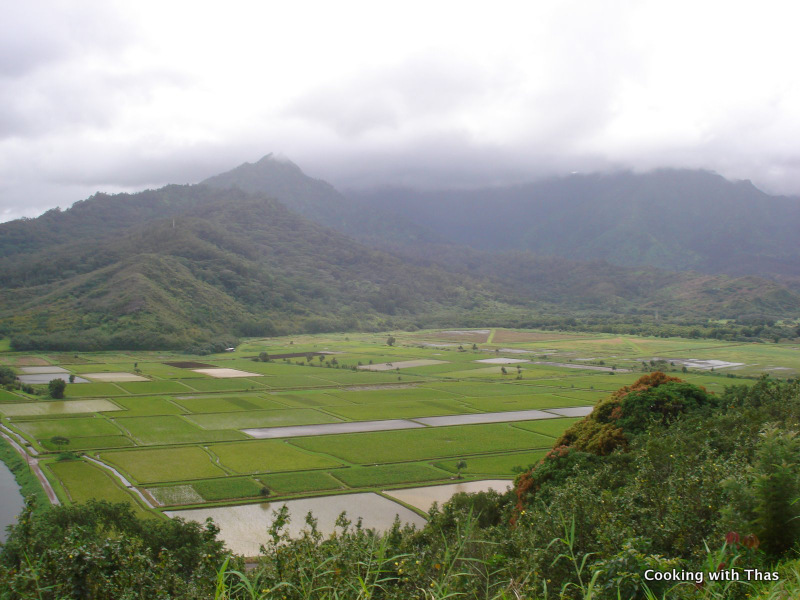 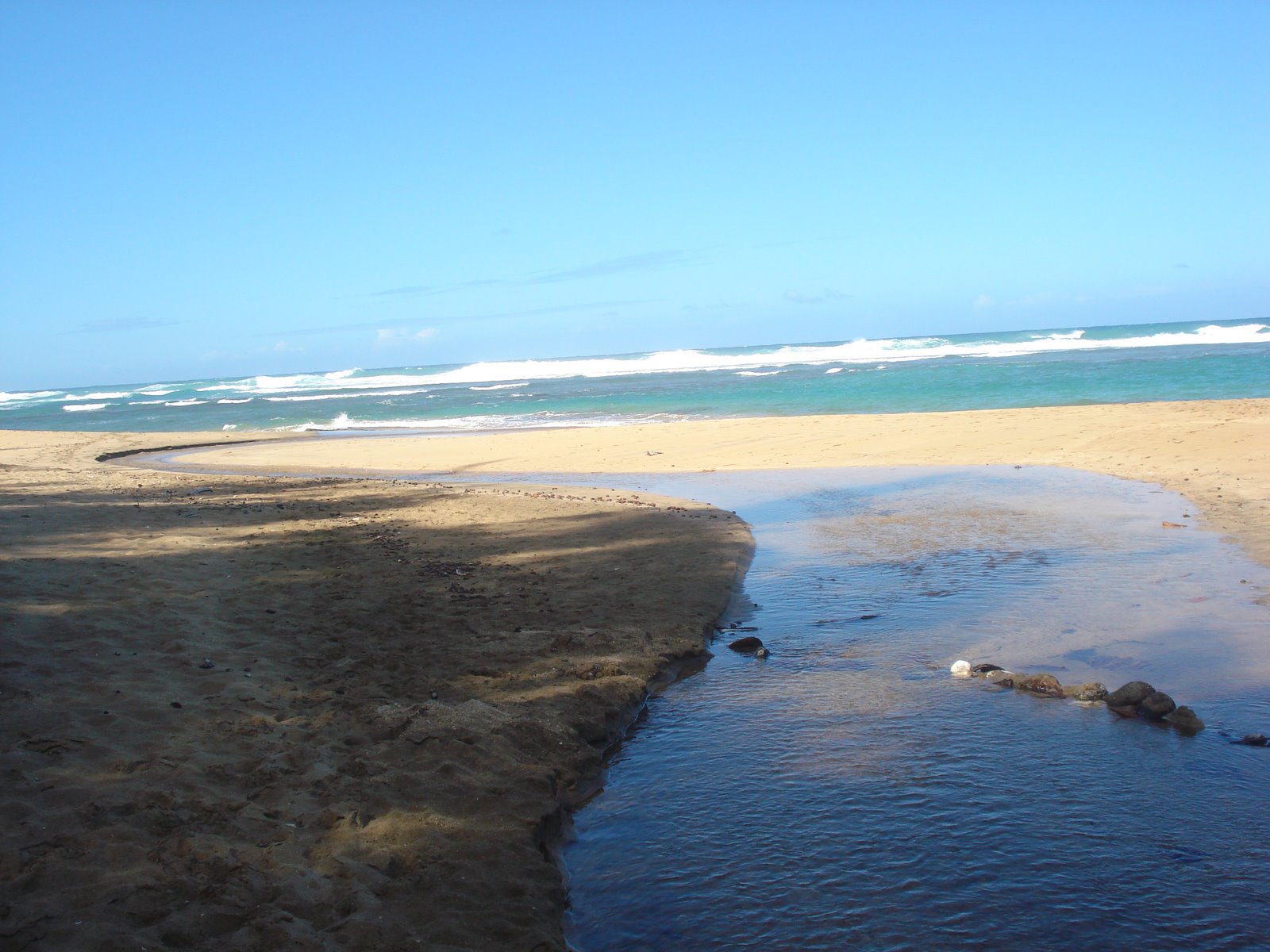 We also made a quick visit to the taro fields. This place reminded me of the villages in my hometown. In Kerala, you get to see a lot of lush places like these. 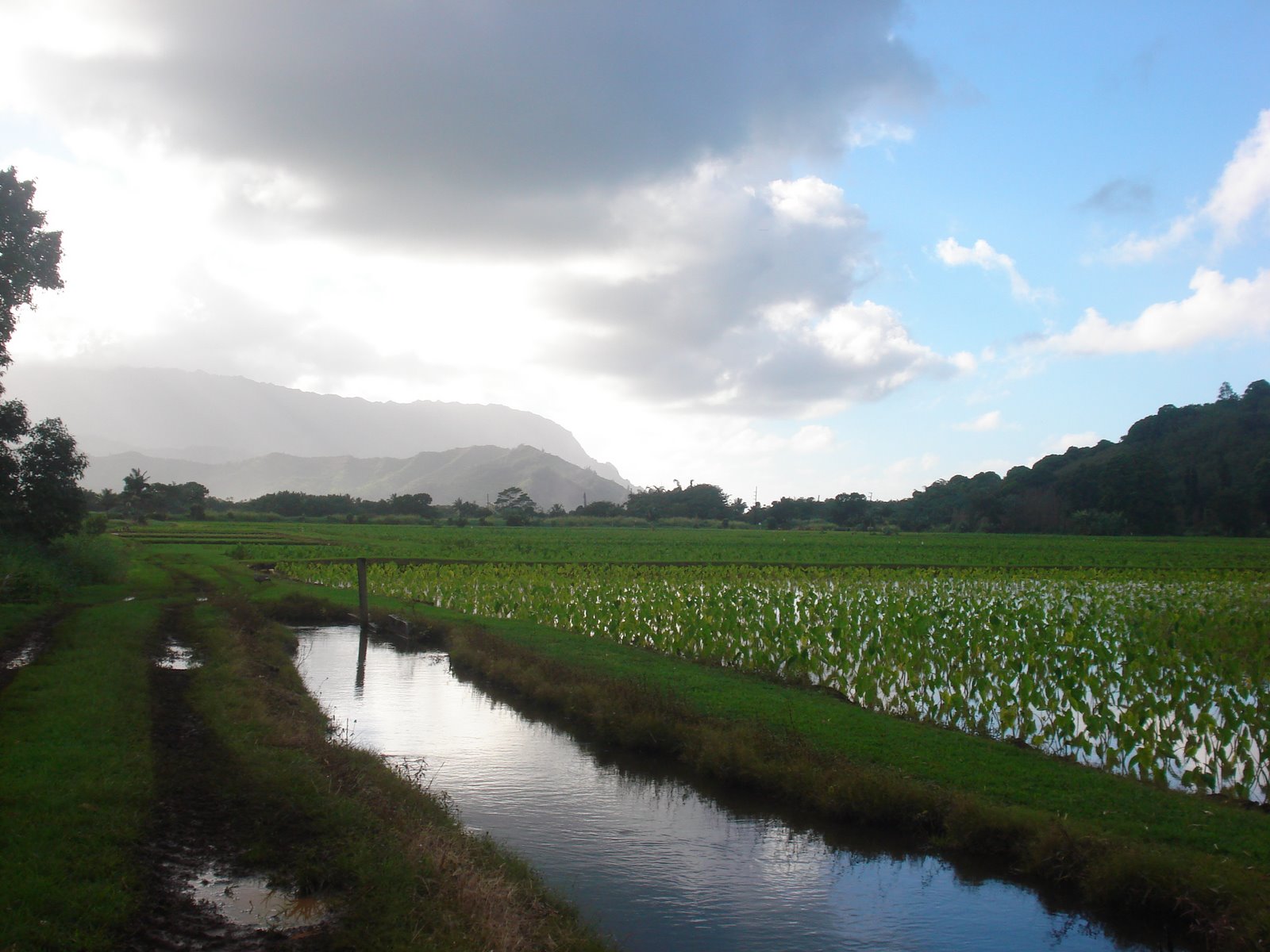 Next we went to Anahola and the Kilauea lighthouse, which stands as a silent sentry. 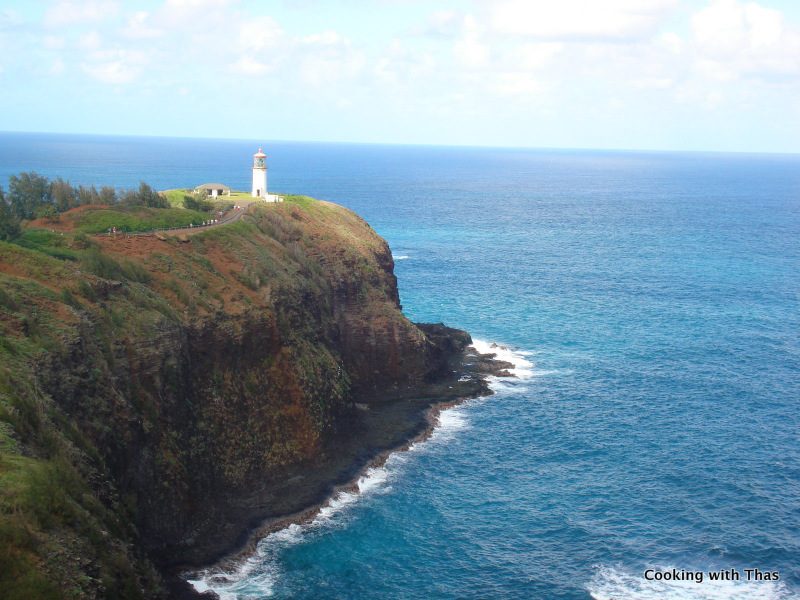 East shore is often referred to as the Coconut Coast. As the name suggests we could see thousands of coconut trees living in harmony. Eastshore is the home to many falls, Opeka’a falls and Wailua falls are the best among them. Wailua falls is one of the easiest falls to access-just drive up and gawk. 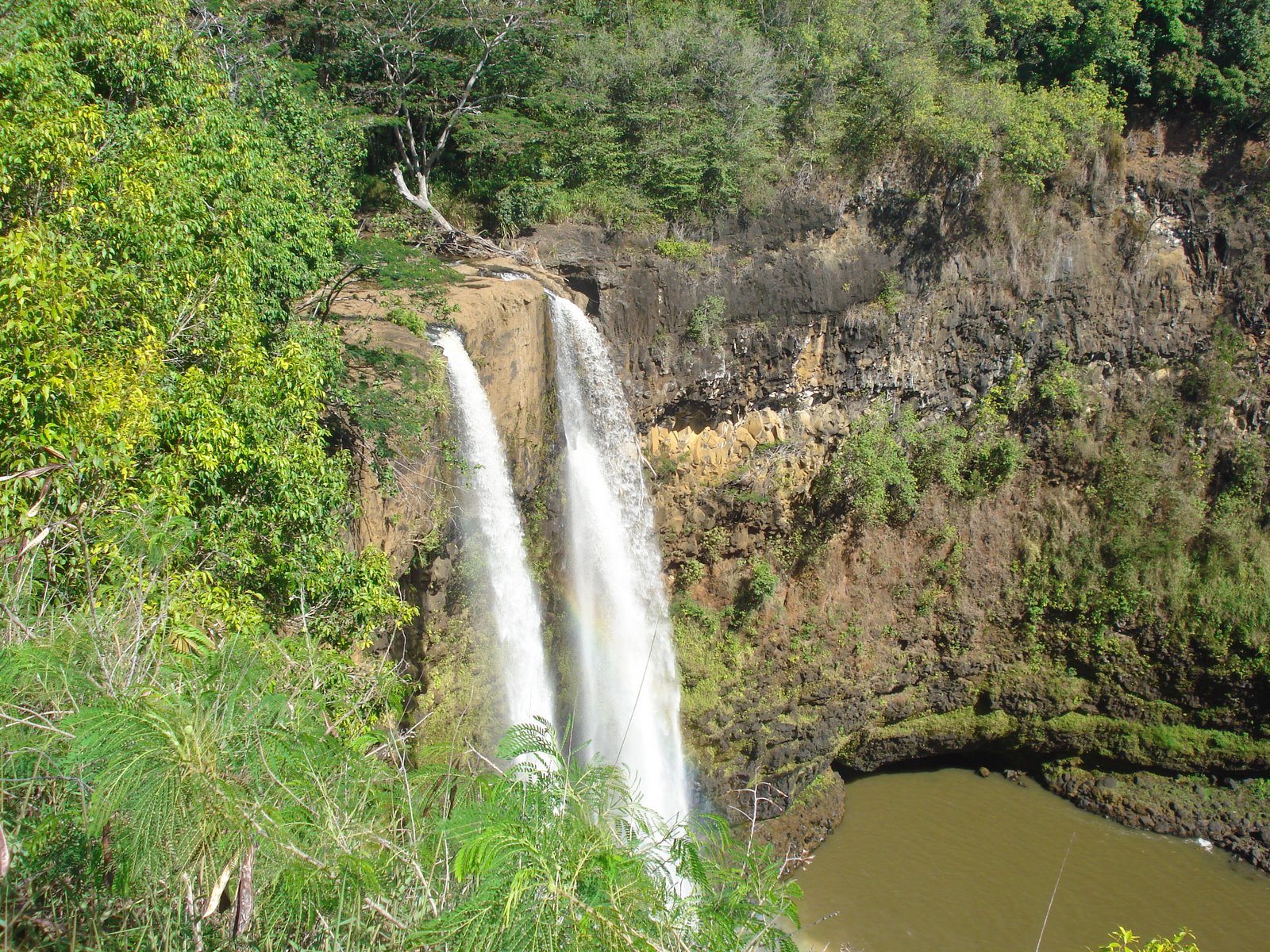 Then there was a real gem, Kipu falls, its a small water fall pouring to a deep pool, which is ringed half way by a 20 foot cliff. There is a rope swing with a ladder leading up the side of the cliff. The entire setting is marvellous. My hubby was adventurous enough to do a cliff dive there. He couldn’t stop diving and he tried it many times while I was seen cheering him up. 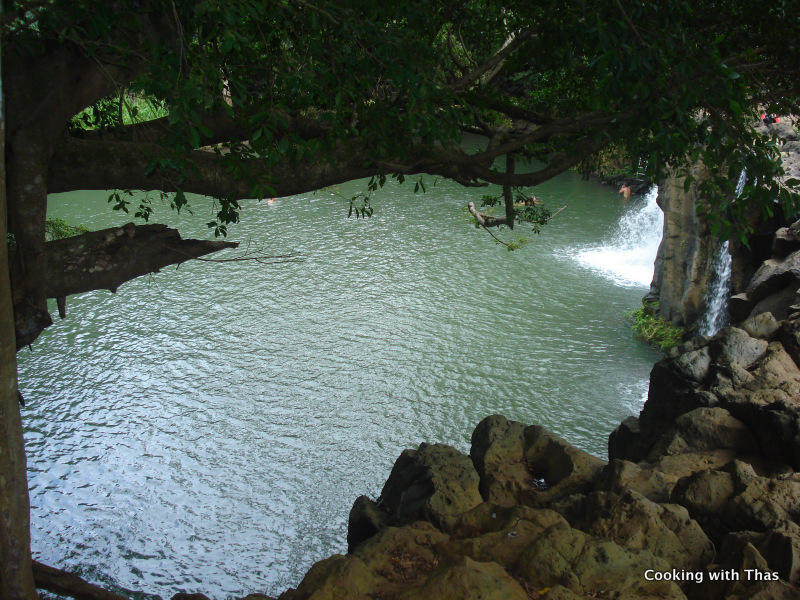 Spouting horn beach park is one not to be missed. It’s a small lava shelf where water from waves is thrust through an opening, causing water and air to squirt out a blowhole, hence causing a loud moaning and gasping sound. Spouting Horn is more dramatic at high tides. So after a long wait, this was the highest blow I got to capture.

Then there was the Po’ipu beach park, best place for swimming and snorkelling, and I was lucky enough to see a huge turtle here.

Heading to the westshore, the hottest part of the island, two things we noticed there were the relative aridity of the land and the deep red color of the soil. 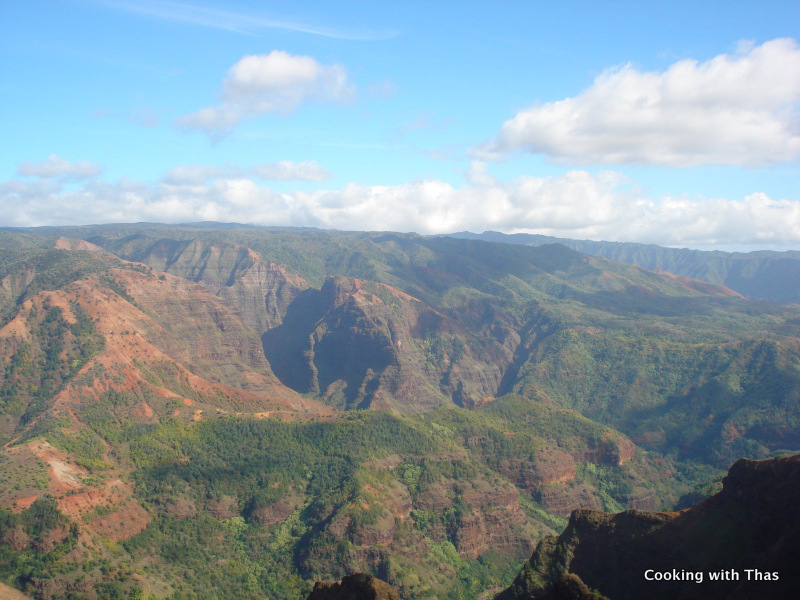 The Waimea Canyon is a spectacular gorge that defies description. It is the Grand Canyon of the Pacific. Driving to the Waimea Canyon was real fun, which was a 40 mile round trip and with a 4,000 elevation rise.

Then there were many lookouts which gave a spectacular view of the Na Pali and the Hanapepe Valley.

Not to forget about Luau, the Hawaiian feast. We learned about the Hawaiian culture, we moved to their melodious music, we enjoyed their authentic hula dance and devoured Hawaiian delicacy. Everyone while in Hawaii attends luau, this is the only chance to get to know about Hawaii from their perceptive. You could book the tickets through your resort or some private touring company. 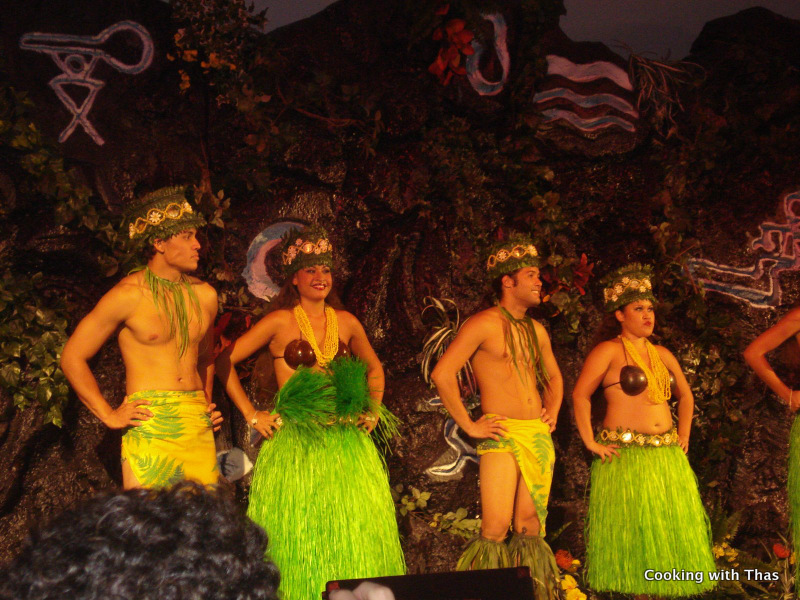 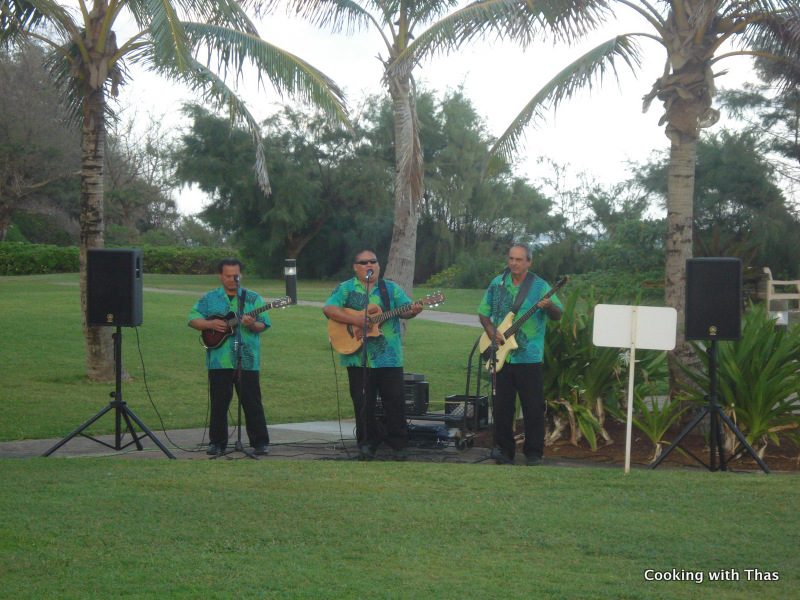 Talking about their food, their authentic dishes are poi, lomi salmon, opihi etc. I didn’t like any of these as those dishes were very blant.

However, to have the best tasting seafood, you should be in Hawaii. I loved the seafood restaurants and their food, they serve the catch of the day, so fresh and yummy. One of my favorites was Volcano Waloo (with sea bass) and scallops. 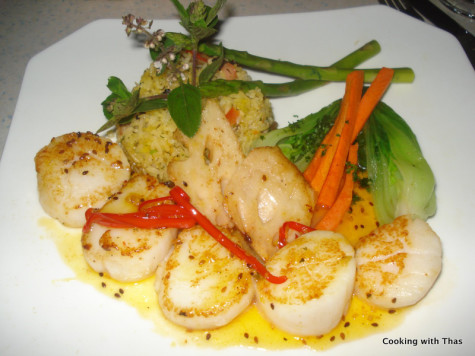 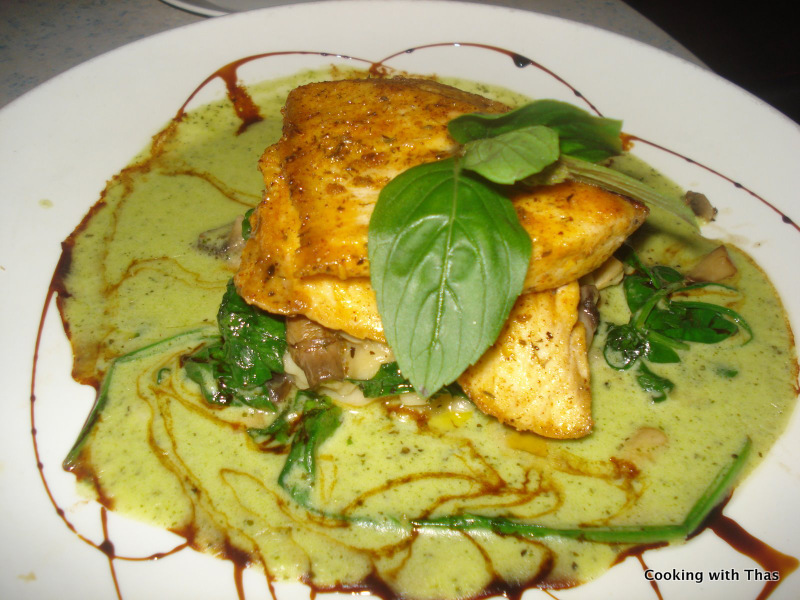 Yet another Hawaiian delicacy is shaved ice, you will see this being sold almost every where. It’s a perfect thirst quencher and great for the hot weather. 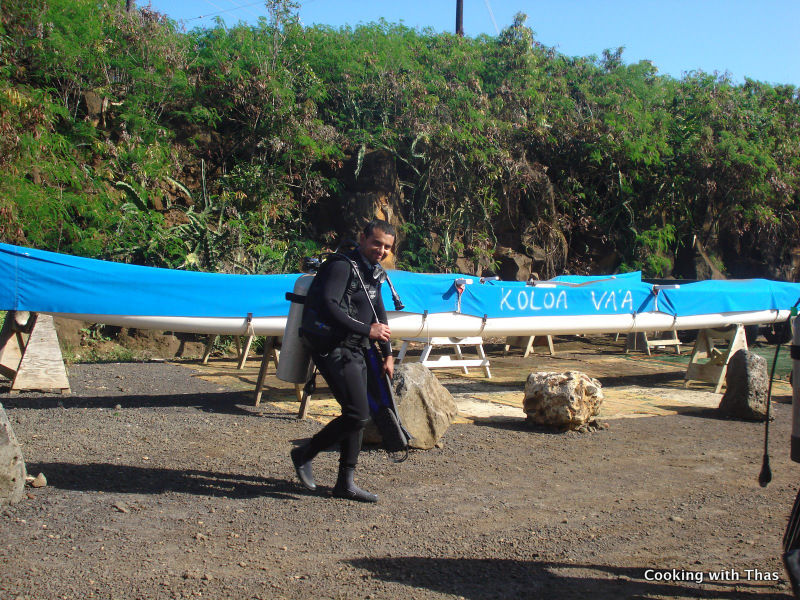 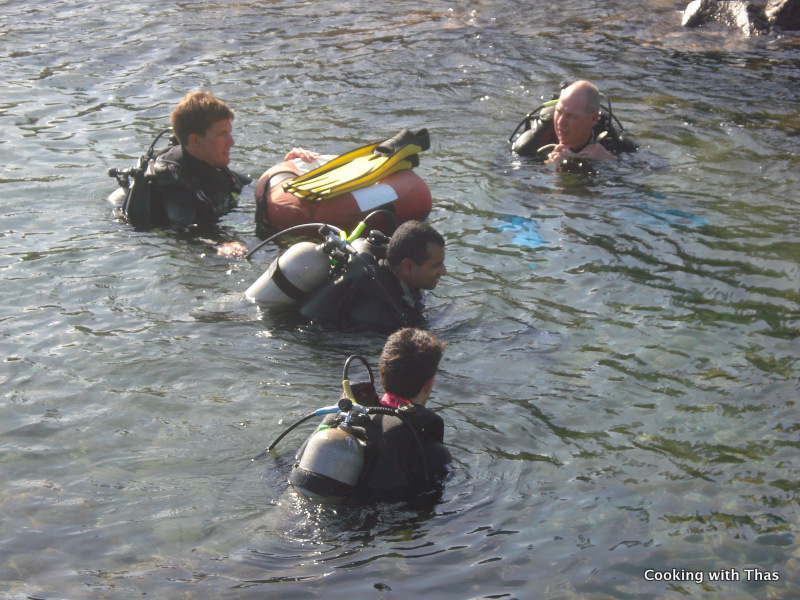 The most amazing adventure we had done in Kauai was “Flying in a powered hang glider( Trike)”. I got the feeling of flying like a bird that too above the most incredible island in the world. I was stunned by the beauty of the whole island looking from the toppest elevation I could ever get to. I highly recommend this if you are planning to go to Kauai. 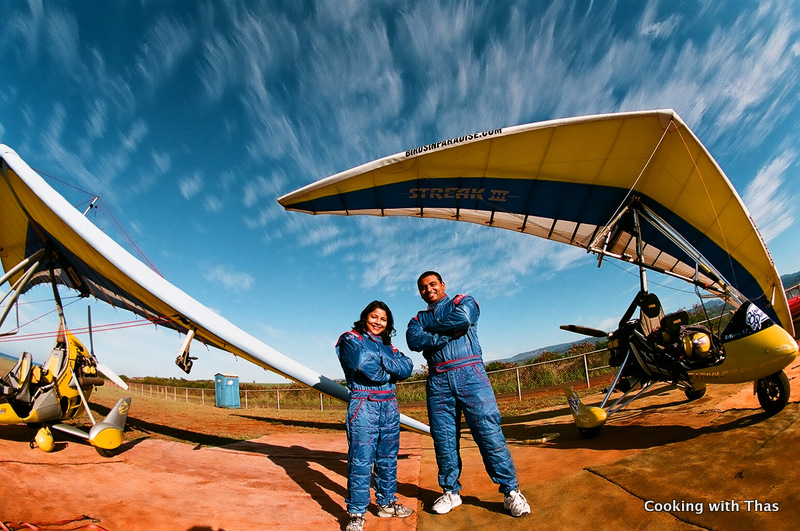 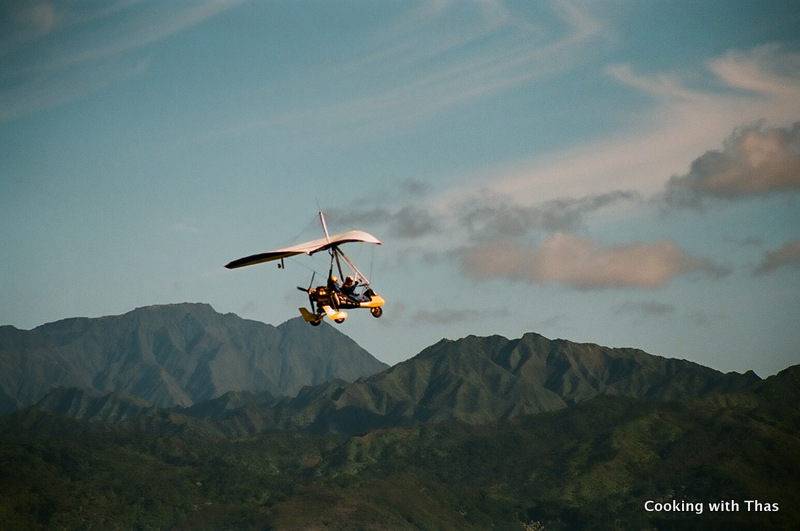 Flying along a powered hang glider is as close as you’ll ever get to feeling like a bird, trust me !! 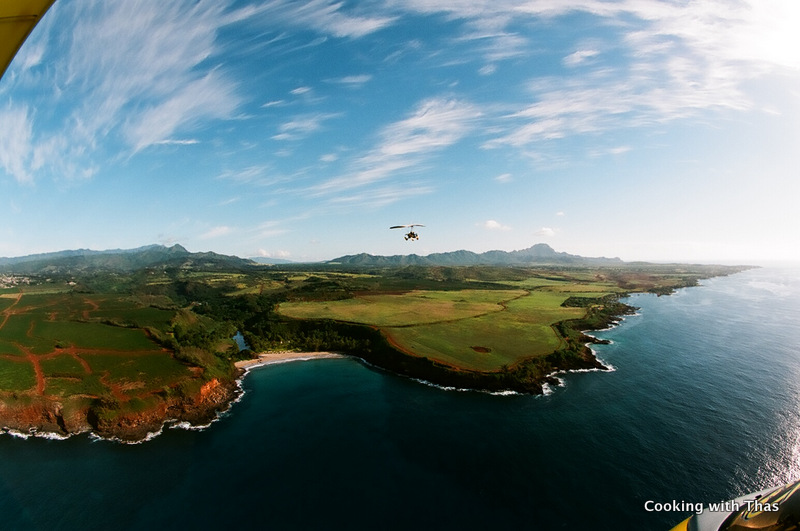 Thats the view of the whole of Kauai from the top, the most breath taking view of the island.

With this there ended our long 2 weeks vacation, and the beginning of our rejuvenated life, this was the best vacation we ever had. We came back so refreshed and with lots of memories to cherish afterwards.

We were definitely stunned by the incomparable beauty, lushness and serenity Hawaii has offered us. “Roaming around with jaws open in Hawaii, it’s an undebatable truth! 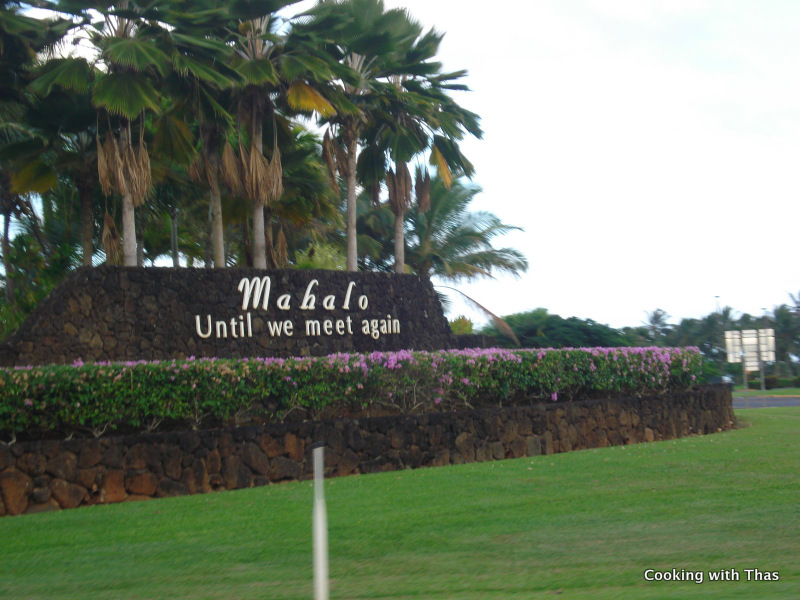 Guess, where did we go on vacation in 2008??? Well, we couldn’t resist Hawaii and so visited the third island: Maui…I will write about Maui next, until then Mahalo…