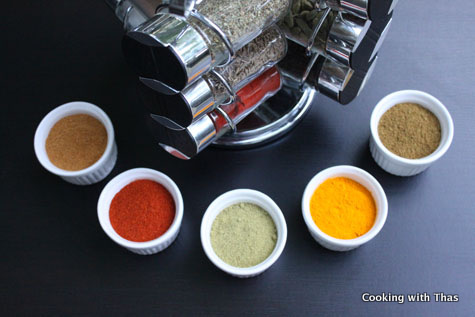 What is Indian food?

It’s a burst of flavors! Yes, that’s my definition of Indian food.

It’s very rare to come across an Indian food that’s bland or under flavored. Indians love their food to be aromatic, flavorful and of course spicy. Every state in India has its own specialty cuisine. Even though there are differences, there are some basic ingredients that are used throughout India. You just have to stack up some basic India spices in your pantry and you are all set for cooking Indian food.

I know from my experience moving and travelling around the U.S and Canada that most cities in North America have at least one Indian store. Devon Avenue in Chicago and Jackson Heights in New York are probably the most popular destinations to get anything Indian.

Many of the major supermarket chains like Walmart and Meijer carry some Indian ingredients in their International Isle. Plus, most Asian stores carry them as well.

If you still can’t find indian ingrendients, keep in mind that most Indian grocery stores in big cities take orders over the phone and ship nationwide. And last but not the least, you have several online retailers like this. 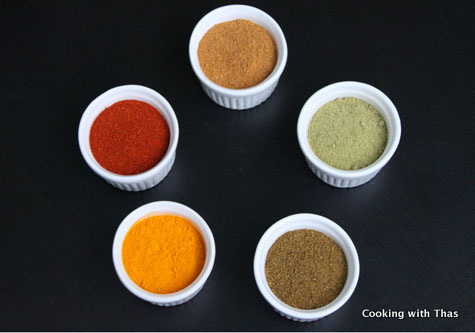 How to make an Easy homemade Garam Masala?

Grind these together in a coffee grinder and store in an air tight container. It’s good to make small quantities of this as the aroma will subside when kept for long. Don’t add more cloves than cardamom as more cloves will give a bitter taste to the garam masala.

These are the common spices that you need to cook Indian food. Store these spices in an air tight container, it will last for long.

Some recipes call for whole spices which is added directly to the oil and are sautéed till aromatic and light brown.

Cumin seeds, whole cardamom, whole cloves, whole cinnamon and star anise seeds. Bay leaves are also used sometimes. These are all used to enhance the taste, aroma and flavor of the dish.

Spice used in most of the desserts

Saffron (my favorite spice) is the one spice used in most of the desserts. It is the most expensive spice, you just need a pinch of saffron strands to flavor up your dessert. Don’t store in the refrigerator, store it in the pantry in an air tight container.
Butter is usually not used in Indian desserts. Ghee which is clarified butter is what is used in desserts. It’s available in all Indian stores and in some big supermarket chains.

In South Indian cooking, we usually add a seasoning to some of the cooked dishes, it’s called tempering. Here are the ingredients you need for making the tempering:

In south Indian cooking, while making fish curries we use tamarind paste to give a tangy taste to the curry.

Four major herbs that are used in Indian cooking:

Optional Ingredients (Good-to-haves)
These are used in many dishes to enhance the flavor.

I guess that’s it. I have mentioned pretty much everything about the common spices used in Indian cooking. Now, you can have a shopping spree and start cooking Indian food. If you have any further questions comment below and I’ll be very happy to answer.

Have fun cooking and baking!